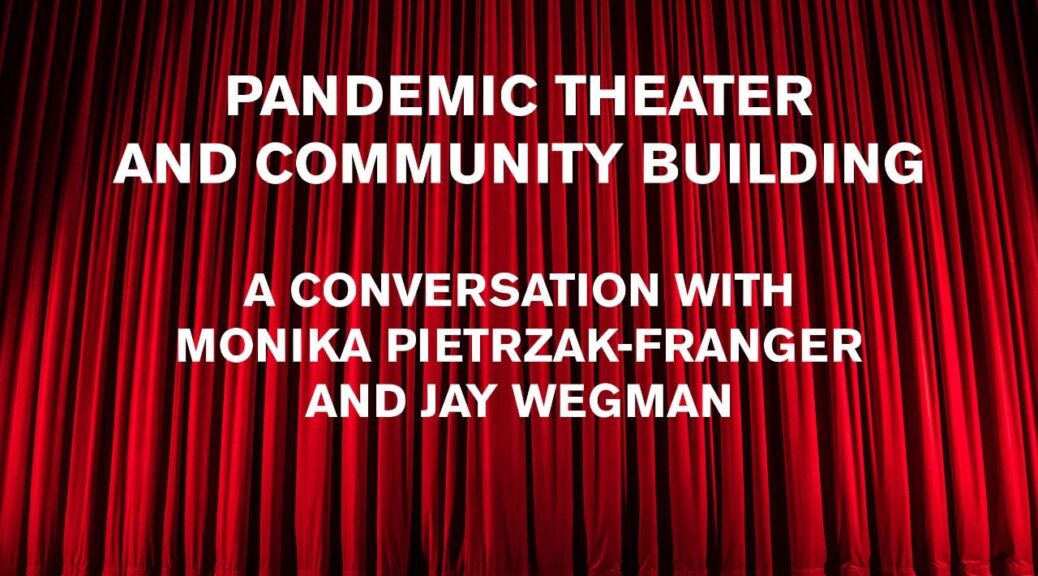 Deutsches Haus at NYU presents “Pandemic Theater and Community Building” with a lecture by the DAAD Visiting Scholar Monika Pietrzak-Franger (Professor of British Cultural and Literary Studies at the University of Vienna) and a conversation with Jay Wegman, Executive Director of NYU’s Skirball Center for the Performing Arts.

Theater has been associated with contagion and contagious emotions since Plato and Aristotle. In the twentieth century, Antonin Artaud proposed that theatre or performance should be like the plague that takes control of actors’ and spectators’ bodies and infects them with an affective energy. For these infections to happen, however, audiences and actors must be in the same room. In times of the COVID-19 pandemic, this spatial proximity has been substituted by theater mostly performed and/or streamed online.

In this talk, Monika Pietrzak-Franger will look at a variety of online plays and their attempts at community building, and then engage in conversation with Jay Wegman about how the pandemic has changed the ways in which we conceptualize, produce, and experience theater:

Monika Pietrzak-Franger is the Chair of British Cultural and Literary Studies at the University of Vienna, Austria. Her areas of research include Medical Humanities, Adaptation, Inter- and Transmedia Studies, Victorian and Neo-Victorian Studies, Biopics, Digital Fictions, the Digital Literary Sphere.

Jay Wegman is the Director of NYU Skirball Center for the Performing Arts in New York City, where he has been responsible for the artistic direction and leadership since 2016. He previously served as Director of the Abrons Art Center at Henry Street Settlement from 2006-2016. During his tenure, Abrons was awarded a 2014 OBIE Award for Innovative Excellence and a 2015 Bessie Award for Best Production. He also served as Canon for Liturgy and the Arts at The Cathedral of St. John the Divine for over a decade and was a Fellow at the John F. Kennedy Center for the Performing Arts in Washington, D.C. He frequently serves on review panels for public funding and private foundations, and was awarded the 2015 Franky Award for “making a long-term, extraordinary impact on contemporary theatre and performance in New York City.” He is a graduate of the University of Minnesota and Yale University.

“Pandemic Theater and Community Building” is funded by the DAAD from funds of the German Federal Foreign Office (AA).

This event will take place at 42 Washington Mews. This semester, based on NYU’s guidelines, in-person events will be open to members of the general public.

Documentation for members of the general public will be checked at the door and must include:
◦ Name
◦ Birthdate
◦ Dates of doses
◦ Vaccine manufacture for each dose
◦ Documentation is in English